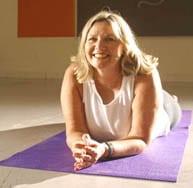 When Patricia Kerr left the midwest in the mid 70’s, she wasn’t exactly seeking enlightenment. What she really had in mind was fame and fortune in the record business, so she put together an all-female band, Ira Gobu. While woodshedding in Connecticut, the girls discovered an Integral Yoga center and began coming for hatha classes, and Friday night kirtan. One day their teacher, Padma, informed them that her guru, Swami Satchidananda was coming to town, and they were invited to meet him in a small private satsang at his home.

It was a meeting that would change her life. Patricia asked Swamiji to bless her little band, and he serenely told her to “give the people something uplifting” with the music. After that, a series of events transpired, like beads on a mala, (rosary) all strung together: She went to a ten day silent retreat to be initiated by Swamiji himself, where she met her future husband, who then got her a record deal at RCA, where she recorded her signature ballad, “Water My Soul”, which she often sang for Sri Gurudev, Swami Satchidananda, and the other devotees.

He gave her the name Meera, the celestial singer.

A corporate purge at RCA left “Water My Soul” languishing on the shelf, but Meera continued to write and record while her interest in yoga was flourishing. She took the Integral Yoga teacher training in 1978 at the Satchidananada Ashram, began teaching at the IYI in New York City, and got married.

A week after her husband, Les Alexander, left for California to produce his first sit-com, “No Soap Radio”,Meera gave birth to her latest production, Sam. They moved to the west coast, where Les began producing movies.

Two years later, her son Dave was born. Although Meera was a full time mom, she continued to teach yoga privately in her home, and when the boys were a little older, moved with them to the Yogaville Ashram in Virginia. For the next three years, Sam and Dave attended school at the Vidyalayam, (Temple of Learning) where they had closecontact with Sri Gurudev, and were taught in the yogic tradition.

One of the outstanding aspects of the Ashram was the Lotus Temple, an ecumenical shrine designed by Satchidananada as a spiritual home for people of all faiths. Meditating together every day at noon became Meera’s cherished ritual, and it was during one of those divine meditations that Big Yoga came to her.

Big, not just in terms of large, but expansive, inclusive, integrating all aspects of yoga, including chanting, asana, pranayama, deep relaxation, jnana, raja, kriya and karma yoga, as she had been taught under the guidance of her Guru.

After living at the ashram for a few years, Meera and her boys moved back to the west coast, where she began teaching Big Yoga classes for Santa Monica Parks and Recreation Centers. Adapting her class from Integral Yoga, it evolved over time and became the basis of her groundbreaking DVD, Big Yoga Hatha 1.

When her mother became ill with Alzheimers disease, Meera took an active part in her care, and moved to Michigan where she could be in close proximity to the retirement home where her mom lived until spring of 2010. Her mother lived just long enough to see the publication of the Big Yoga book. That same spring, Meera also released a new DVD, for people who may have felt that Hatha 1 was too challenging. Titled Big Yoga Flex-Ability, it is designed for an older clientele, or anyone with stiffness, extra weight, or injury.

Currently Meera is providing Yoga classes locally, and is launching her new project, Stress Strategiesâ€”programs designed for the workplace, to lower healthcare costs, improve company morale, and boost creative thinking. Its just one more way Yoga is BIG! Meera Believes “You don’t have to be thin to enjoy the benefits of yoga!”