One of my Yoga students recently complained of a sharp pain in her lower back and buttocks that radiated down the leg and foot–classic symptoms of sciatica.  She said it sometimes wrapped around the side of the hip and down the front of the knee, even down to the ankle, and was eager to learn some Yoga poses to assist in reducing the pain.  We decided to start with SUPTA PADANGUSTHASANA,  reclining big toe pose.  You may want to give it a try:

We started on the mat, in savaasana, corpse pose, lying on the back, with the legs and arms wide.  She felt she would be more comfortable with a folded blanket under her head, but that is optional.  Then she bent the right knee, drawing the foot toward the buttocks, and continuing by taking hold of the shin and pressing the knee towards the chest.  The opposite leg came back into alignment with the left hip, and was pressing into the floor with the foot flexed, toes pointing upward. 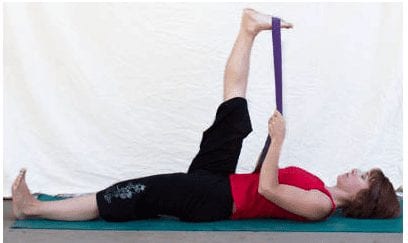 Next we looped a strap around the ball of the right foot, holding the  strap in both hands, and with an inhale she straightened the knee, as she pressed the right heel up toward the ceiling. As she walked her hands up the strap toward the foot, both her arms and right leg gradually became fully extended, while the shoulders relaxed toward the floor.  As she continued in the pose for a few minutes, she continued to expand the  shoulder blades wide.  It helped to remind her to keep the upper part of the body relaxed and bring the attention to the extended leg.

To come out of the pose, she dropped the strap, and began to lower the right leg to the floor, keeping it straight as possible, using the strength of the abdominal muscles.  We repeated on the other side, then rested in savaasana for a minute.  We followed it up with child’s pose, but that’s also optional.  I suggested she do this every day and track her progress.

There are other poses for sciatica that we’ll be exploring in future blogs.  If you have sciatica, try this, and let me know how you’re doing!