Last weekend, here at Yogaville, I attended a workshop to become a laughing yoga teacher.  Ha ha ha ha aaaaa!  It was a blast.  Led by laughing yoga expert, Bharata Wingham, we 35 participants spent the entire weekend laughing and relaxing.  Yukking it up and then meditation.  Making goofy eye contact and then closing the eyes and going within.

What I love is the way laughter energizes the system and makes you feel as free as a child.  We did several practice “laughs”and what’s remarkable is that the body doesn’t know whether your laughter is real or fake.   You still get the benefits, which are profound. 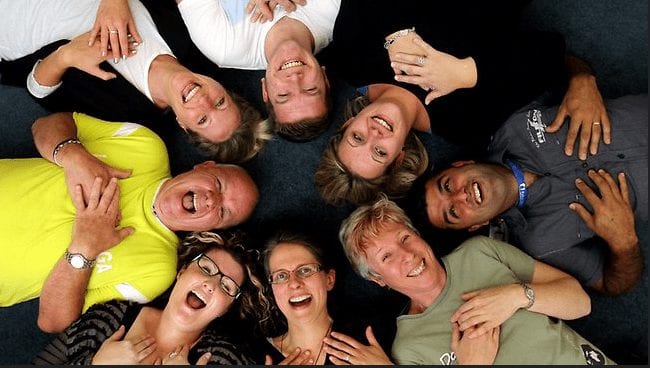 When we laugh for an extended period of time–say 15 minutes or so, it initially elevates the blood pressure, but then lowers it, and similarly, it speeds up the heart rate and breath, but then lowers it, bringing the body into a more relaxed state.  Did you know it requires 37 muscles to make a frown, but only 18 to make a smile?  It’s easier and less taxing to be happy!

The first evening we practiced about a half hour of laughing games–may favorite is “gibberish”.  We were standing in a big circle, and each person in turn told a story to his neighbor in gibberish.  Adults get very creative when they’re given permission to act silly, and the facial expressions, funny vocal sounds, and exaggerated arm and body movements were really hilarious.  After the laughing games, Bharata had us lie on the floor in a traditional Yoga pose, savaasana, the corpse pose.  We gave our bodies up to the floor.  As we kept our focus inward, we spent about 5 minutes laughing for no reason.  How wierd is that?  The laughter comes in waves, as one person begins and then fades but another person is just starting a big belly laugh.  There were tee hees, guffaws, ho ho ho’s, ha ha ha’s, snickers, snorts and sobs. Then we were guided by Bharata’s soothing voice into a progressive relaxation leading into silence.  We rested then, experiencing the beauty of our own peace and happiness.

Bharata had encouraged us to really listen to the sound of our own laughter, and get to know it.  I love that idea.  It’s another way of becoming more intimate with who we really are, of connecting to the joy that is deep and enduring within.  You can fake laughter, but it’s still uniquely YOURS.

← Yoga Dont's Yoga at the Smithsonian! →