As a long-time devotional music fan, I am always happy to hear new music from sincere performers.  My personal favorites run from J.S. Bach to Jai Uttal–that’s my disclaimer!  That’s why I was delighted to hear from Karan at Spirit Voyage Records–yes, we all still use the old school term, records–to ask if I’d be interested in reviewing some of their new titles.  Of course I said yes, and was sent 3 new CDsto listen to, digest and enjoy.

First, There is Silent Moonlight Meditation, by  Sikh artist,  Gurunam Singh.  He writes, plays guitar, and  has a beautiful, resonant voice that has embodies the 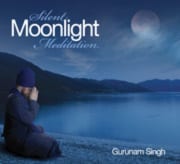 feeling of devotion.  Skillfully produced by Hans Christian, who also plays cello and a host of other instruments, the album is flavored by traditional Indian percussion and strings that don’t overpower the vocals.  A few of the tracks were written by Gurunam Singh,  in the tradition of  modern bhajans, and other tracks are ancient mantras sung repetitively, allowing the listener to dive deep into the power of the mantra.    The opening track, Dharti Hai, was my favorite, possibly because it made me think of Yogi Bhajan’s dynamic presence.  The liner notes explain that the mantra, Dharti Hai, Akash Hai, Guru Ram Das Hai, was taught by the great Yogi, who was a dear friend of my teacher, Swami Satchidananda.  Whenever I saw them together, they were always hugging, prostrating before each other, and giggling.  Such a great memory. Other inspiring tracks are the ancient chant Jai Te Gung, and Ma, which can put the listener into a trance of Divine Mother devotion.  The title track is also lovely and evocative of the moonlight.

The next CD, titled Seasons of the Soul,  is from the mother of the now-famous chant artist, Snatam Kaur.  Prabhu Nam Kaur  was singing bhajans before Snatam was a twinkle in her mother’s eye.  In his fascinating book, The Yoga of Kirtan, by Steven Rosen, Snatam Kaur is quoted as saying “My mother was the real inspiration and teacher of my life, who taught me to see the kirtan as an infinite source of bliss”. 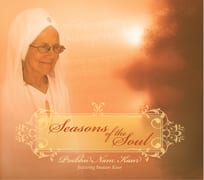 Seasons of the Soul

That bliss is evident and pervasive in Prabhu Nam’s singing, which is done, in the Sikh tradition, “without ego”.  She plays harmonium throughout the album, and is accompanied by various guitars, bass, viola, woodwinds and tabla.  A surprising element that I found charming is the clarinet, played by her producer, Ram Das Khalsa.  When listening to “Har Har Boleeai”, I wasn’t sure whether I was hearing music from Isreal, India, or was it Mexico?  I loved that!  And listening closely, I could hear the sweet harmonies provided by Snatam, which compliment her mother’s vocals as only a daughter or sister’s voice can do.  Most of the tracks on the album sound as if they are traditional bhajans, but there are two tracks that are a mixture of modern folk song and bhajan that makes the CD accessible.

A week or so later I received Jewels of Silence, a CD by vocalist Ashana,

who accompanies herself with crystal singing bowls.  For this project, produced and arranged by Thomas Barquee, Ashana plays a constant drone on the singing bowls, and each track has a special “bija”, or seed mantra that activates and balances the various chakras, beginning with the root chakra, and moving up to the crown chakra.  Traditional Indian instruments are played by Sandip Chaterjee on Santoor; Shakti Nag on Bansre;  Anjan Basu on Esraj; and Aloke Dasgupta on Sitar.  Keyboards are played by the producer, and the overall effect is peaceful, healing and meditative.  The vocal lines are long and serene, and Ashana’s voice is pure honey.  A great morning meditation for your tea reverie.

All three albums are lovely.  I love Spirit Voyage, because they offer such transcendent music, and you can download it immediately!