There’s a lot of talk these days about gun control .  It makes me a little sick.  I want to be on the record about this.  I am a pacifist.  I would rather lay down my life than shoot someone–that may seem a little facile, because I don’t have young children that I might need to protect with a gun.  I’m not young and sexy, so I’m not afraid of being raped.  I am old enough to have lived a full life, so if someone murdered me tomorrow, I wouldn’t like it, but I would accept it–I think.  Admittedly, this is all academic.  But if my beliefs were challenged unexpectedly by an intruder pointing a gun at my head, –well, that’s where the Yoga practices come in.

The only reason I can see for having a gun is to shoot somebody.  To kill somebody.  That is the undeniable intent.  As a Yogi, I have been practicing meditation for over half my life, practicing peace.  In the Patanjali Yoga Sutras, it states “In the presence of one firmly established in non-violence, all hostilities cease”.  (11:35)  So, by my practice, I am holding the space for peace.  I am modeling peace.  I embody peace.  I feel this is my greatest gift to the world!  Instead of mucking up the world with bad vibes and hostilities, I am radiating–to the best of my ability–the peace of my Divine Nature. And, because like attracts like, I’m counting on my intentions to attract more of the same.  So far it’s been working!

My Guru, Sri Swami Satchidananda, used to say “Peace is my God”.  And though it is our natural state, we have so much covering up our True Self.  We are so identified with our ideas of good and bad, right and wrong and with our judgements and evaluations of everything under the sun.  We live in duality, and insist that our position is correct.  It’s hard to remember our peace when we are making our neighbor wrong for his beliefs.

The way to remember your peace is to find a practice that cultivates a calm mind.  It can be a simple meditation, a gentle hatha practice, some selfless service to those less fortunate.  You could spend more time praying, singing, being grateful.  You could investigate the strategies of your own ego, and look at the ways the mind wants to trick you into thinking you will be safer with a gun in your home.

Many of the world religions stress non-violence.  “Thou shalt not kill”–you’ve heard that one before.  Patanjali stresses in the yama/niyamas –a sort of 10 commandments of Yoga– the ideas of purity, contentment and non-harming.  And though I can’t boast that I am a perfectly non-violent person, I am doing what I can.  Do you think Martin Luther King would advocate bringing guns into the classroom?  How do you think Mohandas Ghandi would handle the American gun problem?  Our beautiful country was born and bred in blood, and we are the foremost purveyors of guns and bombs to  the whole world.  It’s very profitable!  And there is profit in violent movies and video games.  We have become inured  to violence, until it hits too close to home, as it did in Sandy Hook when so many young children were massacred  so brutally.

At the beginning of the Gulf War,  I was chatting with my producer, Rick Rosenthal about war.  We were in the studio working on voice overs for the Big Yoga Hatha One video.    We were both shocked that the country was falling for the “weapons of mass destruction” line.  Rick is a smart businessman, and I respected his opinion on worldly things, so I asked him, “Why not have a Department of Peace?”.  His response was “There’s no money in it”.

But peace is an inside job.  If you are horrified by what happened in Sandy Hook, look deep into your heart to see what you can do to cultivate peace in yourself.  As Swami Satchidananda said, “Peace on earth begins with me”. 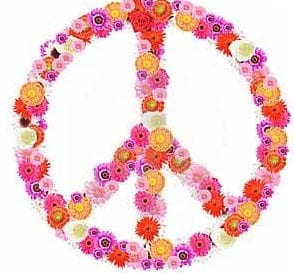