I am the first to admit I am a slacker Yogi.  I knew early on that the best way for me to get on the mat regularly was to take teacher training, and get out and teach others.  I went to Pomfret, Connecticut way back in 1978 and spent the month at the Ashramâ€”yes, there was an ashram before the ashram in Virginia– with our old friends and teachers Satya Greenstone, Swami Sharadananda, Prahaladan Mandlekorn and Sister Maitreyi.  It was a challenging month sleeping in a pup tent on the back lawn, getting poison ivy, and missing my sweetheart, Sukarta, but on the flip side, we had frequent visits with Sri Gurudev, (Sri Swami Satchidananda) and subtle encounters with the silent saints and sages that were in our midst.    I began teaching at the New York IYI as soon as summer was over, and felt IYI was my home.  Teaching regularly has helped me to practice outside of class, not only the asanas, but also living my Yoga out in the world.  Words cannot express the gratitude I feel for the ongoing unfoldment in me that is a result of taking that first teacher training.

I was one of the more voluptuous Yoginis in those days, and was fond of fasting as a way to control my weight, keep my appetites in check, and enhance my bhav, or sense of devotion.   But as I got into my menopause years, I began to pack on the pounds.  I couldnt keep up the fasting that I had always enjoyedâ€”something about losing testosterone or progesterone.  I began experimenting with the tried and true Yoga poses to make them more comfortable for my curves, bumps and jiggles.  I knew instinctively my evolving practice could be of benefit to others like me who wanted to do Yoga, but didnt want to be miserable in a class full ofgumby gals.

I actually got the name for Big Yoga while I was meditating at the Lotus Shrine in Yogaville, Virginia.  On my walk to the noon meditation, I had been musing on the nameIntegral Yoga and wondered if there were a more user friendly way of describing our beloved path.  Integral is such a difficult wordâ€”hard to say, difficult to understandâ€”I was looking for another way to say the same thing.  As I settled into the silence, I heardâ€”literally heardâ€”a voice (guess whose!) sayBig Yoga.  Because of the double meaning, I knew it was coming from Sri Gurudev!  Big, as in expansive, inclusive of all the various Yoga practices and techniques, but also big, as in the bigger body!  It was several years before I began teaching Big Yoga, and it evolves from class to class.  We all carry our weight in different places, so one pose may have several variations.  One of my favorites is to simply place a small (or large) book under the chin for the half-locust pose.  Many of my students have large breasts, which can make this pose uncomfortable.  You may have seen students try this pose with their chin floating in mid-air, which minimizes the whole effect of using the chin as a fulcrum.  Such a small adaptation can work wonders for your people of size.

After teaching a Big Yoga class in Santa Monica for a few sessions, I asked my former husband, Sukarta (Lester) Alexander, (compiler and editor of the first book of Sri Gurudevs teachings,  Beyond Words) who is in the film business, how could I get a video made of this class.  He saidWrite a script.  As soon as I finished it, he hooked me up with a friend, Rick Rosenthal, who worked with me and produced the first video, Big Yoga Hatha 1.  Its perfect for someone who doesnt feel comfortable attending a class in public.  We finished shooting the video just days before Sri Gurudev left the body in 2002.

I discovered the Hatha 1 video, which follows the Integral Yoga Hatha 1 format, was too difficult for some of my older students, and was looking for ideas for a second video.  My friend and mentor, Hope Mell, taught a Joint Freeing Series class that I attended at the ashram, and I knew instantly that this was the perfect thing for my next video, which I call Big Yoga Flex-Ability.  I teach it to everyone!  Next time youre at the Ashram, go take Hopes classâ€”shes a revelation!

There are lots more adaptations in my book, Big Yoga:  A Simple Guide for Bigger Bodies.  You can get it and my DVDs at Integral Yoga Distribution. Doing these simple practices over a lifetime has saved me from a host of physical problems that often plague the overweight. 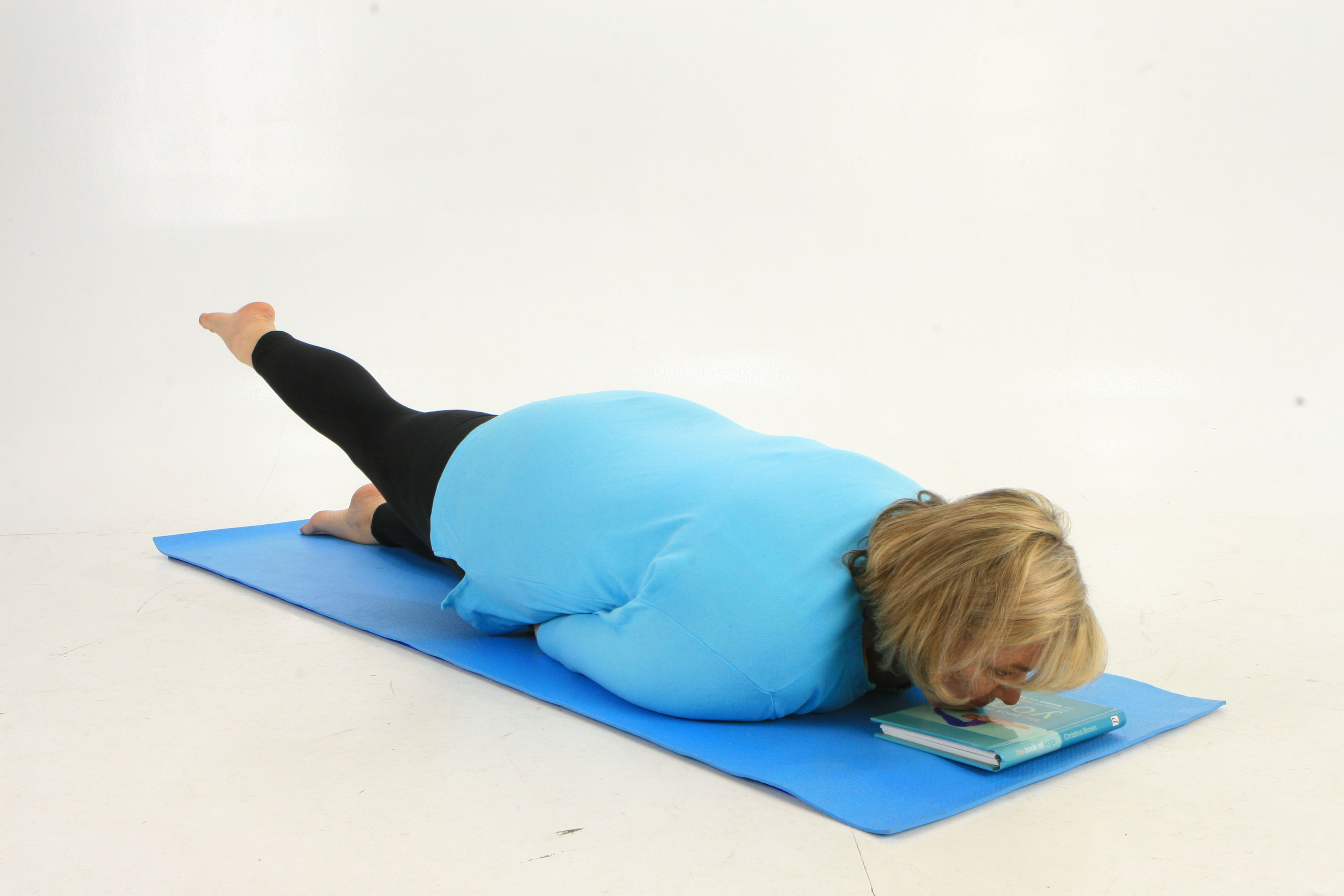 Use a small book under the chin